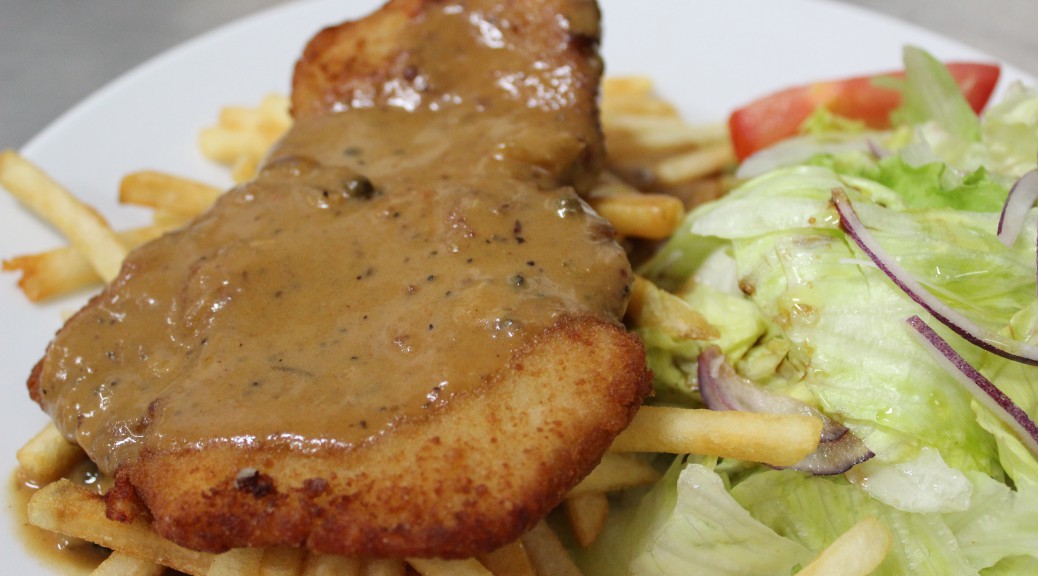 It is time for me to share my thoughts about the almighty and much adored Chicken Schnitzel and it’s BFF, the deliciously smothered Chicken Parmigiana.

The question really does need to be discussed….. should your hospitality venue serve these well known items or not ?????

I want to share with you an experience that I had at a club that we did a lot of work for a couple of years back.  I can name the club as it no longer trades; ‘Souths on Chalmers’ which was also known as South Sydney Rugby League Club in Chalmers Street, Redfern.

Firstly, let me say that I was oozing passion for this club, the brand, the cute little ‘resting rabbit’ logo and of course what the club was trying to achieve.  We worked tirelessly and worked many unpaid hours to help this club try and realise it’s dream.  Sadly, the club closed not much more than 12 months after it first opened.  Why ? There were many, many reasons, too many to discuss, especially in a blog that is really about the infamous Chicken Schnitzel.

The club used the services of a Contract Caterer who was very well known as a restaurateur and function/events operator.  They had not been involved with a club prior to this.  Let me tell you that I thought that their food was pretty damn good.  Some of the menu items that I loved were:

The problem was that only a percentage of those members and visitors who came to visit the club enjoyed these types of dishes. They were dishes that you could have every so often, but perhaps not once, twice or three times a week.

I cannot tell you how many times that customers said  “why don’t you have a chicken schnitty or a chicken parmy on the menu?” .  On the club’s very active Facebook page there were many, many mentions about how nice the food was but they wanted to see a Chicken Schnitty and Chicken Parmy on the menu.  People openly voiced their thoughts all over social media about the absence of the items. They said that they would come more often if these were on the menu.  There were families that shared their thoughts about wanting to bring their family to the club for birthdays but their brother/father etc wanted to have a Chicken Schnitty and it was not on the menu so they were going to the pub around the corner who, coincidentally were smart enough to realise the absence of the Chicken Schnitty from the club’s menu spelled ‘O P P O R T U N I T Y’ for the pubs in the area …. and trust me, they vigorously marketed this to their prospects.

With all the feedback that came through and was passed on to the caterer, they unfortunately chose not to add this to their menu as it was seen as ‘club food’.  My thoughts are that ‘if it looks like a duck, it smells like a duck, it quacks like a duck then it must be a duck’.  This was a club.  It was a hospitality venue that wanted families, groups, parties and more. .  Unfortunately the item was not added to the menu.  It may very well have been an item that on its own, did not offer huge profitability but if it was viewed as perhaps a ‘loss leader’ then maybe they would have seen their revenue double or triple just by adding what the customer wanted to the menu.

The club is now closed which makes me sad.  There were good people working there and good intentions and big dreams.  I wonder to this day though, if that Chicken Schnitty and its BFF the Chicken Parmy were part of the menu, how much of a difference this may have made to the ongoing viability of the Club.  Who knows !  Does the world actually revolve around the Chicken Schnitty ?

There are some that think that having a Chicken Schnitty on their menu attracts the wrong clientele.   I know that my family, my friends and so many of my colleagues enjoy fine dining at its best, new exciting and creative menus and radical taste combinations, but I also know that the majority of them really, really want to go somewhere where they can get a Chicken Schnitty in a relaxed environment as well.  You will find me once a month at our local bowling club and guess what I order ?  …… the Chicken Schnitty which comes with pepper sauce, yes the one and same Chicken Schnitty that you see in the picture.  In fact,  there are a bunch of us that meet at the club just because a few of the group love the Chicken Schnitty.

What do you think about having an item that many people want and ask for on a club and pub menu  ?  Should it be included ??