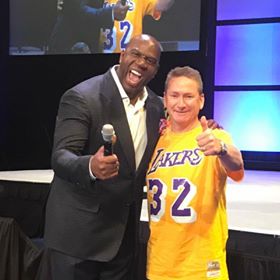 Steve lived, breathed and bled basketball ??.  I knew that his blood was honestly purple and yellow, which suited me fine as they too are my favourite colours??.  His number one hero was Magic Johnson from the LA Lakers.  Since 1992 I have not ever called Steve, “Steve”.  I started calling him ‘Magic’ a few months into working together and I have respectfully called him by that name ever since (never have I called him Steve).   Late last year, I even sent one of our purple and yellow company Wiz Balls to (Steve) ‘Magic’ as I thought that it would make him smile as it was a ball and it was in Lakers colours.  I told him that he was to use his office bin as the basket and shoot goals all day.  I knew that he actually would do this.